NYC scaffolding is getting an upgrade 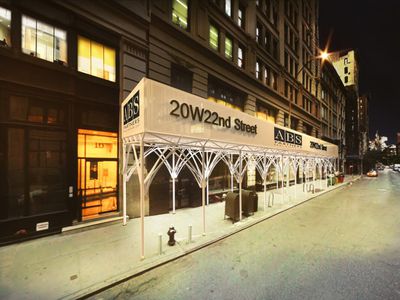 Urban Umbrella, made of recycled steel and translucent plastic panel, is coming to two NYC sites

The first beneficiaries of a 2010 Big Apple competition intended to fancy up the city’s scaffolding have arrived. A whole seven years ago, then 28-year-old designer Young-Hwan Choi, of the firm Urban Umbrella, won $10,000 with his winning design. Urban Umbrella has spent the following years perfecting the scaffolding system in Toronto.

And now, according to the New York Post, the company is returning to New York to “share the visual wealth” at a few construction and building sites around the city. “We needed to prove we could operate under the largest skyscrapers,” Benjamin Krall, co-founder of Urban Umbrella, told the Post of the time spent in Canada. He says their design is currently being installed in front of the largest construction sites in downtown Toronto.

So here’s what it’ll look like: The scaffolding is made of recycled steel and translucent plastic panels that come in a variety of colors, with a design resembling an open umbrella. Built-in LED lighting can be customized with different colors. By taking out the cross bracing of traditional scaffolding, the sidewalk cover feels more open and less boxy.

Apparently the idea is catching on, with Urban Umbrella already raising $2 million in venture capital funding from New York real estate family offices and building owners, according to the Post. It’ll be available to building owners at a slightly higher cost than traditional scaffolding. The company, however, notes that traditional sidewalk sheds often decrease the value of buildings, and believes their design wouldn’t do so.

Video of the Week: Architectural Marvel in London, England

The latest at 105 Hudson