In the News: The Palm on the block 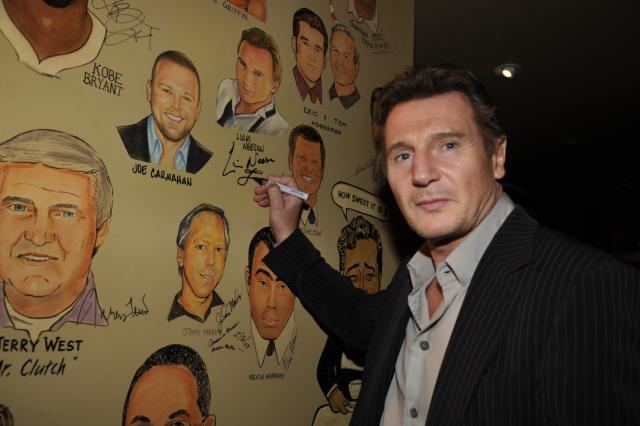 THE PALM IS FOR SALE
Crain’s reports that Palm, the steakhouse chain on West Street and Warren (there’s Liam Neeson signing his caricature) with its original in Midtown and nine others across the country (plus Mexico City) is on the block. This spring there was all sorts of commotion as the company filed for bankruptcy after a feud between the branches of the family — the fourth generation of Bozzis and Ganzis — who own it. This week, a Florida judge told a bankruptcy trustee to find a buyer. The restaurant was founded in 1926. From Crain’s: “‘After 93 years of being in the family, Palm will be sold,’ said Fred Newman, an attorney who represents one side of the warring clan.” According to the restaurant’s website, it all started like this: Pio Bozzi and John Ganzi arrive in New York from Parma, Italy, and open a restaurant in the heart of a bustling Italian neighborhood on Second Avenue. “Parma” is mistakenly registered as “Palm” due to their thick Italian accents. The Palm quickly becomes a hub for local journalists and artists and takes off as a steakhouse after a customer requests a steak and Ganzi runs up Second Avenue to a butcher shop to get one, cooking it to order.”

MTA CONDUCTOR ATTACKED
A transit conductor was assaulted at the Chambers Street station of the J train on Monday afternoon, and Patch reports that this follows a slew of attacks in recent weeks on MTA workers. “Three MTA workers were assaulted on Friday in Manhattan, one attack in which a pedestrian threw a glass bottle at a bus operator’s window, according to the MTA. The authority’s conductors were attacked on the F and C lines two days in a row in mid-November as well.”

RENTS PRESERVED IN TWO BRIDGES
From the Broadsheet: City Council member Margaret Chin has brokered an agreement that will preserve affordability for rental tenants at Knickerbocker Village, a giant apartment complex in the Two Bridges neighborhood, which was built by a public-private partnership in the 1930s. “The complex bears striking similarities to Battery Park City’s largest residential development, Gateway Plaza. Both boast multiple buildings (12 on the Lower East Side and six in Battery Park City), surrounding a central garden. Each has a similar number of apartments: 1,590 for Knickerbocker Village and 1705 in Gateway Plaza. And the two projects were conceived as bulwarks of affordability.”

TIN BUILDING COMING ALONG AT THE SEAPORT
New York YIMBY has an update on the reconstruction of the landmarked Tin Building at the Seaport — the building that once housed the fish market. “The original structure, made mostly of a wooden frame featuring an exterior of corrugated metal sheets, suffered a major fire in 1995 and later weathered extensive flood damage from Hurricane Sandy in 2012. After approvals from the city’s Landmark Preservation Commission in 2016, the structure was carefully dismantled and is now being rebuilt 33 feet away from its original location, directly to the west of Pier 17.” The building will eventually be another restaurant for Jean-Georges Vongerichten, who also has The Fulton on Pier 17.

Video of the Week: The Tranquility of Camelot in Queensland, Australia

The Trib at 25: Looking back on two and a half decades of covering Tribeca

In Chelsea, a remnant of NYC’s industrial past will get a revamp